The angelic pictures present spiritual beings in the shape of chubby young children called “putti” . They  show the incarnation of the spirit on the most concrete level of existence. Spirits shown as putti are confronted with real facts and emotion like wealth, abundance and physicality, typical for life in the  age of baroque. While working on the physicality of the bodies, the idea arose to experiment with different skin tones captured in various  lighting situations.

Different colors are used as base layer on the canvas. The upper layer of oil paint has to be  sufficiently transparent to allow the color of the base layer still to shine through. The interaction between different color tones of bodies of putti, empty areas between the bodies, and color mood contribute to the entire visual impression of the painting.

The  most recent  series of painting is entitled “Morgenstraich”, a traditional early-morning carnival parade in the Swiss city of Basel. A visit to the Morgenstraich Parade stimulated the work dedicated to the effects generated by the interference of light, color and darkness. The parade starts at four o´clock in the morning and all artificial light sources are switched off before the colorful glow of the lanterns showing many different subjects lightes up the city.

The physical phenomenon “light” is captured in areas of the canvas left white without paint while the major share of the area carries a base layer of dark paint. It creates a strong chiaroscuro (light- dark) effect, which induces the luminosity or the dullness of the colors. A dark background and the spatial arrangement of the figures creates the impression of perspective. The light dominates the foreground and forms highly contoured and colored figures , while the darkness swallows the remaining ones, which glow in the distance.

The challenge in creating the abstract mixed-media work named “Concretizations” is mixing oil and acrylic paints. These are nearly incompatible media. During the creation of these pieces the focus is more on the technical procedure than on the reproduction of a mentally predesigned target image that has to be reproduced on a surface. Consequently the final result of the creative process remains unpredictable up to the last steps.

The tapestries were created in two specially equipped studios in Brno and Kdyne, Czech Republic. Water color paintings of landscapes or the more abstract mixed media paintings serve as small scale sketches for the much bigger tapestries.  These finished pieces then display the differentiation of patterns and colors on much larger areas. For the creation of the entire set of visual impressions, both, subtle and major variations of colors, but also differences in fabric structure, are employed.

The night is not black

Think of the frightening idea that the day could never end. Yet night returns in a regular and reoccurring rhythm; allowing us to rebound. Imagination, ideas, thoughts and dreams become clearer and louder. Nighttime brings me the ideas for my paintings.

The night is a grand set designer.

On night’s stage, the far is close and closeness afar. The set loses its crispness and perspective. Objects are framed by blackness that come to life in a planar fashion and appear as if moving back and forth. A carousel of backdrops starts moving. I intend to capture these dream ideas and to fill the large areas of darkness in a rhythmic and viscous manner.

Such paintings are created in an adventurous manner that is almost as if one approaches a basement aisle of discovery.

I will let you know what I care to express: The thoughts and moods in my head are brought onto the canvas by my hands.

I hand my viewers a fragmented window of time; as in a picture: A table with glasses. After the guests are gone a feeling of loneliness sets in. But have all left already? Night’s coolness brings a film of moisture to the glasses; a cinematographic fog. An illuminated window in the background – does it float or has it grabbed hold of something? I grow tired as night sprinkles its sand into my eyes. The glasses turn into transient fragments of time. Melancholy will stay ’til the onset of dawn, warming me like a fox fur. 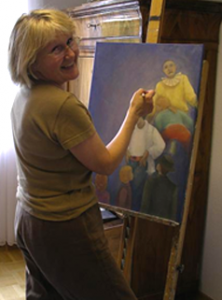 Helga Santel was born in Jablonec, Czech Republic, in 1950 and emigrated to Germany in 1965. In the 1990´s she spent 6 years in the United States. Today, once again she lives in Germany.

Her intensive art activities started in 1985 and the creative work can be attributed to four major techniques including oil paintings on canvas, mixed media work ,and tapestries based on the layering of delicate woolen fabrics. While traveling, she frequently creates watercolor paintings which serve as models for some of her tapestries. Many of her pictures have been shown in exhibitions internationally; mainly in Germany, the Czech Republic and the USA.